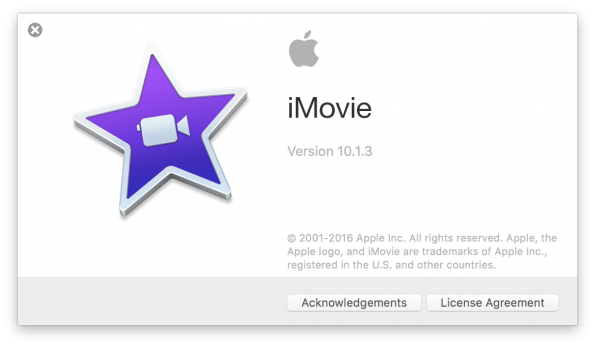 If you are new to video editing, Apple’s iMovie is a relatively easy program to start using. If you have used other video editing programs, you may have to unlearn some things, but they are definitely worth unlearning. Once you learn iMovie, you can move on to the bigger, more powerful Final Cut Pro X for the Mac. You can even use a version of iMovie for iOS devices such as the iPad and iPhone. Both of those devices have quite decent video cameras built into them, and you can begin editing videos you’ve taken on the device right away.

All of the iMovie versions do basically the same thing, which is assemble multiple clips along what is known as a timeline. A playhead starts at the beginning of the assembled clips and moves over them and plays video. Noticeable changes should happen between clips, but the idea is to create a continuous and cohesive story. Adding text before, during, and after clips can assist you in telling the story, and transitions can help smooth the noticeable changes between clips. It’s those things that iMovie does quickly and easily. iMovie also does more complicated tasks such as visual effects and color correction. It will even allow you to do some basic editing of the audio tracks that are either part of the video you shot, or in the form of additional music or sound effects you add to a project.

The first thing you’ll want to do is some preparation. We recommend that you get an external hard drive if you are going to be working with multiple projects and/or using multiple computers. Prepping a hard drive for use on a Mac is the same whether you are using iMovie or Final Cut Pro X. Our Getting Started with Final Cut Pro X article talks about hard drive preparation and even lists some drives that we recommend purchasing.

Before you can begin editing anything in iMovie, you need to get your video footage into the program. In the Getting Started with Final Cut Pro X article we talk about creating a Camera Archive, something that both iMovie and Final Cut Pro X can recognize and use. A camera archive is basically a way to duplicate the flash memory card (usually an SD card) you use in your camcorder, and transfer one large file to your hard drive. At the time of this writing, only Final Cut can create a camera archive. Once you create it though, you can then format (erase) your flash memory card and re-use it in your camcorder to shoot more footage.

Here are a few videos to help you get started:

One of the things I always like to emphasize is that there are iMovie Keyboard shortcuts (PDF) that allow you accomplish tasks very quickly.